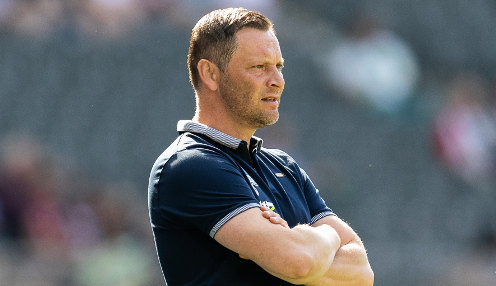 Pal Dardai says "he is looking forward to the task" after being reappointed as Hertha Berlin's manager with a contract running until 2022.

The axe fell on Bruno Labbadia's reign at the weekend following a bitterly disappointing 4-1 loss at home against Werder Bremen to leave the club 14th in the Bundesliga and only two points above the relegation play-off position.

That was not the pre-season plan for Hertha, who have made some ambitious plays in the transfer market over the past 18 months or so, with Jhon Cordoba, Matteo Guendouzi, Lucas Tousart, Krzysztof Piatek, Matheus Cunha and Dodi Lukebakio just some of the headline names to arrive at the Olympiastadion in Berlin since a cash injection from new investors.

Hopes were high that Labbadia could push for Europe this term as they aimed to leave last season's tenth-place finish behind them, however, it was not to be.

Saturday's heavy beating at the hands of Bremen made it one win in eight and that victory came against Schalke.

Dardai was the obvious replacement having coached the club from 2015-2019. The Hungarian is Hertha's record appearance holder and makes the step up from the Under-16 team to lead the seniors once again.

Hungarian Dardai told Bundesliga.com: "It was definitely not my plan to switch from the Under-16s to the professional coaching position.

"But I don't need to explain to anyone what Hertha means to me. So, it was not a question for me that I was going to help out in this situation. I'm looking forward to this task and working with the team."

Hertha are?7/2 to win away to Eintracht Frankfurt on Saturday and the draw is 3/1.