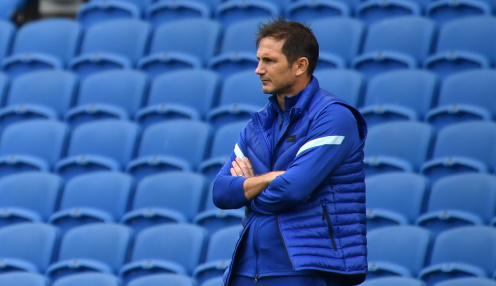 Chelsea have confirmed the departure of head coach Frank Lampard with the club sat ninth in the Premier League.

The 42-year-old took over at Stamford Bridge in July 2019 and was a popular appointment having made 648 appearances and scored a record 211 goals for the club.

Lampard earned plaudits for guiding Chelsea to fourth in his first season, as well as the FA Cup final, despite being hamstrung by a transfer ban.

However, a summer spree of ￡200million saw internationals such as Ben Chilwell, Timo Werner and Kai Havertz arrive, but the Blues boss failed to get the best out of the new faces.

A brief flurry of form did see Chelsea go top of the Premier League with 5th December's 3-1 win over Leeds but they have since slumped to ninth after winning just two of their eight subsequent league games.

Performances have also been disappointing, with the Londoners again disjointed in Sunday's FA Cup fourth round win over Luton and the club confirmed his departure on Monday morning.

A statement on the Chelsea website quoted 0wner Roman Abramovich as saying: "This was a very difficult decision for the Club, not least because I have an excellent personal relationship with Frank and I have the utmost respect for him.

"He is a man of great integrity and has the highest of work ethics. However, under current circumstances we believe it is best to change managers.

"On behalf of everyone at the Club, the Board and personally, I would like to thank Frank for his work as head coach and wish him every success in the future. He is an important icon of this great club and his status here remains undiminished. He will always be warmly welcomed back at Stamford Bridge."

The club say they will not be making any further statements until they have found a new head coach.

Chelsea are next in action on Wednesday when they host Wolves in a game they are?3/5 to win, with the draw?16/5 and the visitors 17/4.