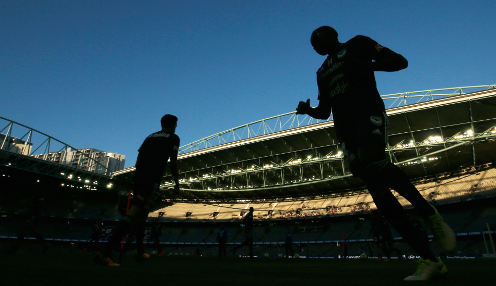 Melbourne Victory will be without Rudy Gestede and Callum McManaman as they look to bounce back against Perth Glory on Tuesday night.

Victory slipped to a 1-0 defeat against Adelaide United on Saturday to leave them without a point from two games in this A-League campaign.

And to make matters worse they also lost Gestede and McManaman, who picked up hamstring and ankle injuries respectively and are looking at two weeks on the sidelines.

Young striker Ben Folami, who is on loan from Ipswich, also remains on the sidelines with a knee injury, and Brebner admits it is not a great situation to be in.

However he does have the likes of Robbie Kruse, Marco Rojas and Elvis Kamsoba so will look to adopt a different approach against Glory.

"It's not great that we don't have those two players because they are big players for us to win us games," Brebner told reporters.

"But we look forward and we're still positive that there's players at this football club that can score goals.

With zero points on the board Brebner is not playing down the urgency of the situation and says they have to start winning irrespective of injuries and being a newly assembled team.

"It's immediately urgent - of course we want to get wins," Brebner added. "I'm not going to stand here and say that we can wait five, six games for our team to gel."

Victory are priced at?16/1 to win the A-League grand final.

Previous Page: Solskjaer thrilled with United improvement Next Page: Everton striker is up for the FA Cup
© HG Sports