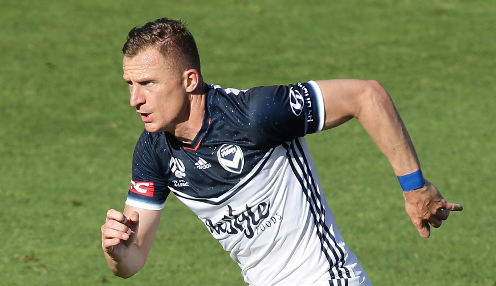 Western United coach Mark Rudan says it is only a matter of time before Besart Berisha finds his shooting boots again and has praised his work ethic for the team.

The striker is the most prolific goal scorer in the history of the A-League, but he has yet to find the back of the net in three games this season.

Despite Western recording a 5-4 victory over Perth Glory at the weekend, Berisha, who was suffering with a hamstring injury in pre-season, still couldn't find the back of the net.

He did however set up two goals and Rudan praised the player's selfless attitude after the win and says it will not be long before he is back among the goals.

"People think Besart is this guy that's somewhat selfish at times. He's only selfish because he needs to be - and he's the top marksman in A-League history for a reason," he said.

"But he's been today - and the first two games - extremely selfless in the way he performs and for that he needs to be given a huge round of applause.

"His teammates at half-time all gathered around him because Bes is very hard on himself and he knew that he had a couple of half-chances. But he did it for the team and that's all I can ask for.

"If we are to be there or thereabouts, we need people to be selfless for this football club and and he certainly was that.
"I was extremely happy with him - the goals will come, I've got no doubt."

Western United are priced at?8/11 to make the A-League top six.