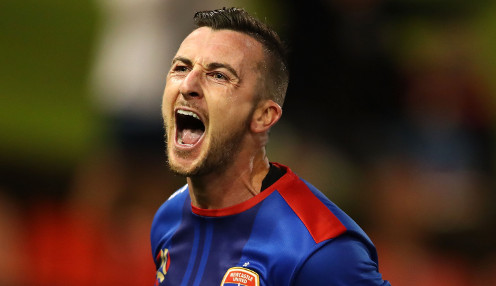 Newcastle coach Craig Deans says the Jets put in their worst performance of the season against Wellington Phoenix but it is the three points that matter the most.

Newcastle picked up their first points of the season courtesy of a 2-1 win against the Nix, but can think themselves lucky as they were second best for much of the game.

The Nix dominated possession for long periods and had a number of shots on goal, but they could not take their chances.

Jets coach Craig Deans admits his side have played better and lost this season, but winning and breaking a four-match losing run was the most important thing.

"We've been working hard for 12 weeks now and we haven't had much reward for that work," Deans said after the win.

"Tonight was probably our worst performance of the season in terms of the football we've played. But the most important thing was the three points."

Valentino Yuel and Roy O'Donovan had put the Jets 2-0 in front before Ulises Davila pulled a goal back from the penalty spot to set up a grandstand finish.

The Jets managed to hang on and Talay admits his side were made to pay for their missed chances.

"We'll continue to do that and try to make it better every game that we play. I have no worries, we've been through this previously."

The Jets are priced at?3/1 to make the A-League top six.