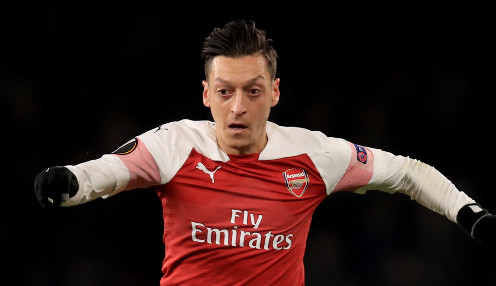 The deal has been in the pipeline for some time, with Ozil having already said his goodbyes to everyone in North London, while Arsenal had agreed to cancel the final six months of his ￡350,000-a-week contract at the Emirates Stadium.

The former Germany international has now officially ended his near eight-year stay with the Gunners by penning a three-and-a-half year deal with Fener - the club he grew up supporting as a child.

Ozil's transfer brings to an end an up and down spell at Arsenal for the 32-year-old, as he has not featured for the Gunners since last March, with boss Mikel Arteta deeming him surplus to requirements.

However, Ozil does not appear to be dwelling on any negatives and he has instead chosen to remember his time with Arsenal fondly.

"I'd like to thank the club for this amazing journey over the past seven-and-a-half years," Ozil told Arsenal's official website.

"The support I have felt from the team and fans during my time here has been truly incredible and something I will always be grateful for.

"Together we won trophies for the first time in years and created memories that will last a lifetime. The Arsenal fans will forever remain in my heart."

The World Cup winner joins a Fenerbahce side currently sitting third in the Turkish Super Lig standings and he could make his debut for Erol Bulut's side when they play host to Kayserispor on Monday.

Fener are priced at?1/3 to secure a victory from that game, while Kayserispor are available at?13/2 and the draw is on offer at 9/2.