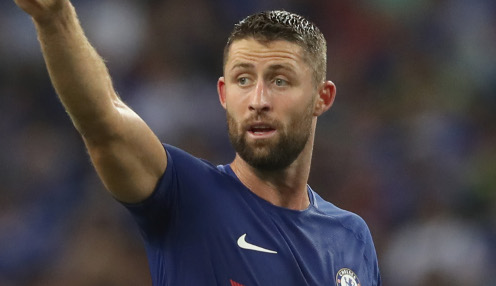 Gary Cahill says he was persuaded to drop into the Championship by the desire of Bournemouth boss Scott Parker and the test of trying to secure promotion with the Cherries.

The former England international is due to make his second appearance for the club after joining on a one-year deal against Queens Park Rangers on Tuesday, a game Bournemouth are? to win. The R's are? and the draw is .

The 35-year-old made his return to the second tier on Saturday as the south coast side secured a comfortable 3-0 victory over Barnsley at home.

It was Cahill's first taste of Championship football for 14 years, the defender having spent the entirety of his career since that experience playing in the top flight.

He's very hungry and that's what I bought into in terms of the squad in general,

The former Bolton and Chelsea centre-half won numerous honours while at Stamford Bridge, including two Premier League titles and the Champions League. He also won 61 caps for England but says he's now looking for a new challenge.

Offers to stay in top flight

Cahill left Crystal Palace at the end of the last season and says he had offers to stay in the Premier League, turning them down in favour of a move to the Vitality Stadium.

Discussing why he moved to Bournemouth, Cahill told Sky Sports: "In terms of the opportunity to come here, I saw that as a totally different challenge to what I've been used to in previous years and one that I was excited about. Hopefully I can bring that bit of experience on the pitch in times that it might be needed. That's what I hope."

When talking about his relationship with boss Parker, he added: "I spoke to him many times over the summer, so I was aware that this was an option early on. He was a big pull, obviously. Knowing him, knowing what he stands for and the way that he was as a player I presumed that would translate into management.

"He wants to win and he's very hungry and that's what I bought into in terms of the squad in general, which has been the case since I've been here."