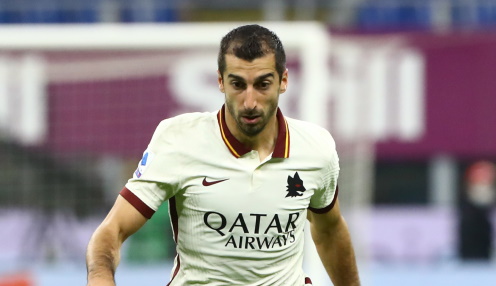 The Armenia international, who moved on a free transfer from Arsenal last summer, is?having another excellent season at Roma, who play Lazio in the Derby della Capitale on Friday evening.

The 31-year-old has revealed he has yet to open discussions regarding a new contract at the Stadio Olimpico but says he could not be happier and is ready to sign fresh terms.

Mkhitaryan first joined Roma on loan for the start of the 2019-20 season, ending three underwhelming years in England.

He struggled to cement a starting place at Manchester United, who he joined for ￡40m from Borussia Dortmund in 2016, and moved on?to Arsenal?but he also failed to hold down a regular place with the Gunners.

He is the Italian side's top-scorer with eight goals this term,?helping his team up to third place in Serie A and is playing some of his best football since he left Dortmund.

Mkhitaryan, who has also contributed eight assists for Paulo Fonseca's high-fliers, told La Repubblica: "Roma believed in me, you can see from how I play that I'm happy here.

"There has been no time to talk about a new deal. But we will sit down soon."