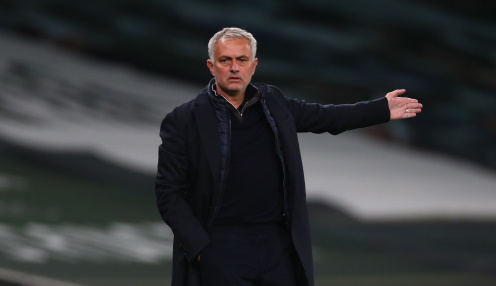 Mourinho covered a range of issues in his press conference ahead of Spurs' rearranged Premier League fixture against Fulham on Wednesday night at the Tottenham Hotspur stadium, but he got particularly animated when questioned about the midfielder's future.

The North London club are unbeaten in their last five games and have won three on the spin, and they currently sit in fourth place in the Premier League table, just four points behind leaders Liverpool.

There has been much speculation over the future of midfielder Winks due to his lack of game time this season, but Mourinho was quick to rubbish any talk of a move for the 24-year-old England international and also revealed that he will be playing on Wednesday night.

Winks has made 101 appearances for Tottenham and gained 10 caps for England at senior level.

When asked at his press conference if Winks was set to go on-loan to Valencia, Mourniho replied: "What do I have to say to stop with this talk? I said already that he’s going nowhere.

"When I say he's going nowhere, what more do you want me to say?

"He played the last matches. He didn't play the last one because it was a chance to let players like Gedson (Fernandes) get minutes.

"Tomorrow he's selected again. If someone's talking to other clubs I'd say don't waste your time."

Tottenham are?4/11 to beat Fulham on Wednesday night, the Cottagers are?15/2 and the draw is available to back at 4/1.

Spurs are?14/1 to win a first Premier League title this season.