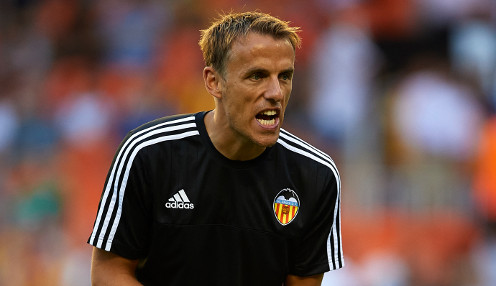 Phil Neville says his Inter Miami side must play as a team if they are to snap a six-game losing streak in the MLS.

The former England Women's coach admits he is under pressure after Wednesday's 5-0 defeat to New England Revolution, who are? to win the MLS Cup this season. Miami, who have the worst record in the league, are .

Neville took charge of the franchise, which is part-owned by his former Manchester United and England teammate David Beckham, in January, but results have been disappointing.

Miami have won only two of their first 12 matches and the rout against New England made it six defeats in a row, five of which were to nil.

They're a team and that's what we must become.

Former Real Madrid and Argentina striker Gonzalo Higuain and Blaise Matuidi, who won 84 caps for France during a glittering career in Europe, started against New England but Miami still found themselves 4-0 down at half-time.

They will now hope to kickstart their second MLS campaign at home to Philadelphia Union on Monday.

Asked whether he is feeling any additional pressure, Neville told reporters: "I've been in football long enough and I know the consequences. We're doing everything in our power, we just need better performances on the field. We're on a run at the moment that puts me under pressure."

Reflecting on the margin of the defeat to New England, Neville said: "Did they have better players than us? On paper, no, but they're a team and that's what we must become. That's all I'm asking for – a team that will fight for each other and look round the dressing room and trust each other."