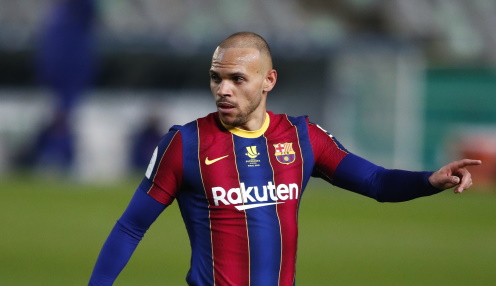 Martin Braithwaite's agent has quashed rumours that the Denmark forward will be leaving Barcelona this summer.

Spanish giants Barcelona are? to win their opening match of the league season against Real Sociedad, who are? to win with the draw .

Braithwaite signed for Barcelona for €18 million in unusual circumstances back in February 2020 with the Catalan club given emergency exception to sign the Dane outside of the transfer window as a result of an injury sustained by Ousmane Dembele.

He managed to score once in 11 appearances during the 2019-20 season before scoring seven times in 42 games across all competitions last term.

It is fair to say he is yet to light up La Liga but there is reported interest in the 30-year-old from elsewhere, most notably Wolves, after his performances at Euro 2020.

Braithwaite played a key role in the Denmark national team's run to the semi-finals of this summer's European Championship and managed to find the net in the 4-0 win over Wales in the last 16.

But the player's agent insists Braithwaite's future is with Barcelona, who have brought in the likes of Sergio Aguero and Memphis Depay this transfer window.

Regarding rumours that Jorge Mendes is pushing for Braithwaite to join Wolves, the striker's agent Hasan Cetinkaya said: "Why should an agent who has no players in Barcelona try to get my player to Wolverhampton even though Jorge Mendes has good connections to clubs like Wolverhampton? It's a waste of everyone's time.

"He was one of the best players at the European Championships with some incredible statistics and he will continue in Barcelona."