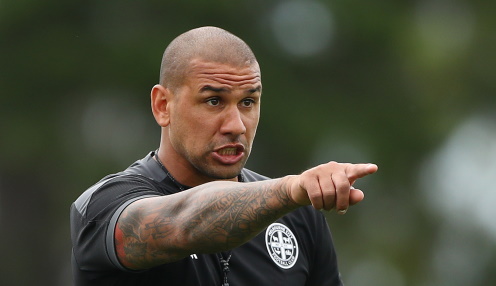 Melbourne City are sweating over the fitness of Andrew Nabbout and Rostyn Griffiths who both picked up injuries in the defeat to Newcastle Jets on Thursday night.

City are priced at? to win the A-League grand final but their final game of the season, a re-arranged game against the Jets, ended in defeat and under an injury cloud.

Nabbout has only just returned from injury and City used the game to get some minutes into the influential attacker.

However along with Griffiths he picked up an injury in the first half and City will now have to assess both players and keep their fingers crossed.

"Andy was always due to play between 30 and 45 minutes, just easing him back in, so we'll assess him," City assistant Des Buckingham said after the game.

"Rostyn just felt a little bit tight so I don't think it's anything too serious, more precautionary."

City are next in action a week on Sunday when they play their home semi-final and the race will be on to get both players fully fit.

There was some better news for City as Nathanial Atkinson played the whole of the second half after recovering from a hamstring injury.

The result means that City have picked up just one win in their last five games but there are no panic stations within the camp.

"We've been trying a couple of different things in preparation for finals," Buckingham said.

"We've certainly had a look at a few things over the last couple of weeks.

"It's now about trying to prepare ourselves ... to put ourselves in the best position (for the semifinal)."