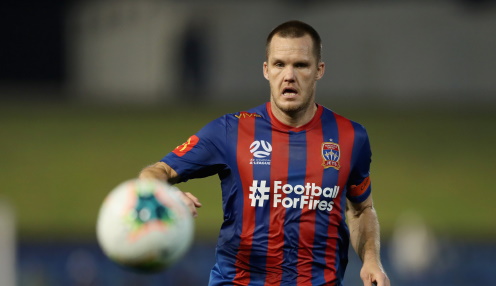 Veteran Newcastle defender Nigel Boogaard has announced his retirement, bringing the curtain down on a career that has spanned 16 years.

Boogaard made the announcement after he played his final game of his career in Newcastle's 2-1 win over Melbourne City on Thursday night.

And the influential defender goes out on a high of some sorts at least as the victory over the minor premiers means the Jets avoided picking up the wooden spoon.

"I didn't go out last night thinking about it being my last game," an emotional Boogaard said.

"I just wanted to make sure we got a result and got off the bottom of the table.

"Just something nice for the boys to hold on to at the end of the year, it was just nice to finish off that way."

Boogaard has had a fine career in the A-League which began in the 2005/6 season when he was part of the Central Coast Mariners inaugural squad going on to make 66 appearances.

He also made 114 appearances for Adelaide United, winning the FFA Cup in 2014, before joining the Jets in 2015.

Boogaard made 122 A-League appearances for his hometown club, being captain in all but one of them and has no regrets about his career.

"I've been blessed, I've been able to play for 16 years," the 34-year-old added. "It's the right time to call it and the start of the year really confirmed for me it was the right time as well.

"I honestly loved every minute of playing for this club and can't wait to cheer the team on from the stands next season."