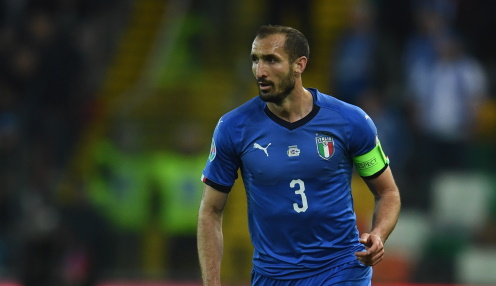 Italy captain Giorgio Chiellini has warned his side that they could face something "extraordinary" when they take on Turkey in the opening game of Euro 2020.

The pair clash on Friday evening at Rome's Stadio Olimpico, with the Azzurri?2/5 for victory, the draw?7/2 and Senol Gunes' side?15/2 to make a winning start in Group A.

They are capable of really extraordinary performances.

Italy's preparations were hit on Thursday by the news that Roma midfielder Lorenzo Pellegrini will miss the tournament.

The Italian Football Federation has asked for permission to call up Fiorentina's Gaetano Castrovilli as his replacement and, while Chiellini admitted it was "tough" for both the squad and Pellegrini to part ways, the Juventus man says the rest of their build-up has been ideal.

Head coach?Roberto Mancini took charge of the national side in May 2018 and has transformed the 1968 European champions.

After failing to qualify for World Cup 2018, the Azzurri are currently on a run of 27-games without defeat and are closing in on the record of 30 unbeaten set by Vittorio Pozzo's team of the 1930s.

The Italians seem perfectly prepared for their return to tournament football and are x to be crowned champions on 11th July.

Chiellini concedes that the squad are quietly confident about their chances of making a winning start but insists they are taking nothing for granted ahead of Friday's big kick-off against a Turkish side they know well.

"We have to experience this month with enthusiasm and see what happens," he told reporters. "Things are going well, we feel mentally and physically ready, now all we can do is step on to the field and face the difficulties with enthusiasm and confidence.

"Turkey are a very strong team, we know several of their players from Serie A, others we'd faced before too. They are capable of really extraordinary performances."