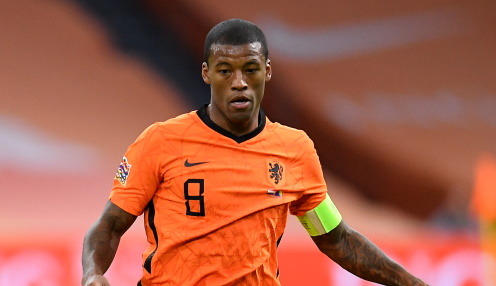 Georginio Wijnaldum predicts Paris Saint-Germain can go "further and higher", having signed for the French giants from Liverpool on a three-year deal.

The midfielder is currently preparing to captain the Netherlands in their European Championship opener against Ukraine in Amsterdam on Sunday for which they are? shots to win, while the Dutch are ?to go on and lift the trophy.

Paris Saint-Germain have proved how good they are in recent years and I am convinced that we can go even further and higher.

Wijnaldum left Liverpool at the end of the 2020/21 season after opting not to sign an extension to his contract at Anfield and, having resisted approaches from both Bayern Munich and Barcelona, will now play under ex-Tottenham boss Mauricio Pochettino in France.

Wijnaldum made 237 appearances for the Merseysiders after joining them from Newcastle United in July 2016, winning the Champions League and Premier League during his five-year spell at Anfield.

The 30-year-old was almost in tears when he was given a guard of honour for his final Liverpool game last month, a 2-0 home win over Crystal Palace which guaranteed Jurgen Klopp's side a spot in next season's Champions League.

The former Feyenoord and PSV Eindhoven star will join a PSG team who have recently been deposed as French champions by Lille.

"Signing for Paris Saint-Germain is a new challenge for me," Wijnaldum told the club's official website. "I'm joining one of the best squads in Europe and I want to bring all my desire and commitment to this ambitious project.

"Paris Saint-Germain have proved how good they are in recent years and I am convinced that we can go even further and higher."