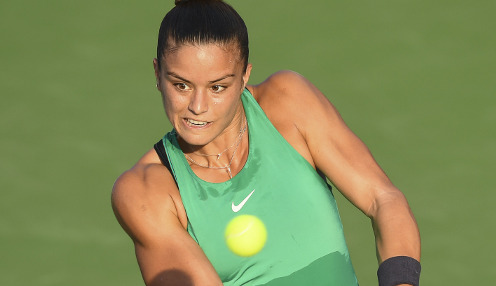 Maria Sakkari says it is a "dream come true" as she upset reigning champion Iga Swiatek to book her place in the French Open semi-finals.

The Greek girl silenced Swiatek in a 6-4 6-4 win to reach the last four and she is now?11/10 to go on and lift her first Grand Slam crown.

Sakkari had never gone beyond the fourth round of a major before her heroics in Paris but she held her nerve against last year's French Open champion Swiatek, who needed treatment on a thigh injury in the final set.

The 25-year-old, who is the 17th seed, is now the highest-ranked woman left in the draw after seeing off the Polish world number eight.

Sakkari has dropped just one set on her way to the semi-finals, which came in her third-round win against Belgian world number 15 Elise Mertens.

We made a huge step today.

The Greek star has won only one title on the WTA Tour, which came in a minor event in Rabat back in 2019, and she admits there is still a long way to go.

Speaking after her breakthrough success, Sakkari said: "I am speechless.

"It is a dream coming true. It is a very nice feeling and I could not have done it without my team and their support. We have a long way to go but we made a huge step today."

Sakkari will face Czech ace Barbora Krejcikova in the semi-finals after she prevailed in a tense battle with American teenage sensation Coco Gauff 7-6 6-3.

Krejcikova had saved five set points against 17-year-old Gauff in the opening set before sealing the victory on her sixth match point.