Robertson not fazed by expectations 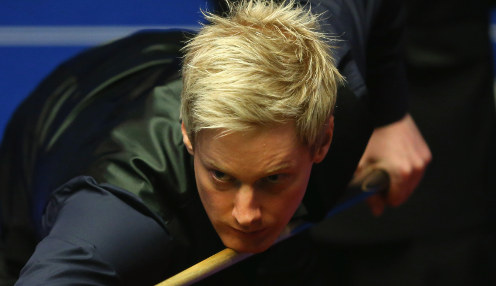 Neil Robertson said he is happy to deal with the demands of expectations after reaching the last 16 of the World Championships in Sheffield.

The 39-year-old Australian made light work of seeing off Liang Wenbo, capitalising on a 6-3 lead to win four straight frames, a dynamic closing show which included two centuries and a break of 73 to claim victory.

Robertson, who won his only world crown in 2010 when he beat Graeme Dott 18-13 in the Crucible final, will play either Jack Lisowski or Ali Carter in the second round.

He has reached the quarter-finals in each of the last two years but expectations are high after he won last month's Tour Championship with a 10-4 victory over Ronnie O'Sullivan.

Robertson beat Lisowski in the quarter-finals on his way to that triumph and is happy to deal with the pressure that tends to be heaped on a fancied runner.

He said: "At some point you have to cope with becoming the favourite in an event.

"I've always been able to deal with it and it is the really big guns who cope with it the best.

"Over the last seven or eight years, in five of those years I've blitzed my opponents and everyone is saying 'his name's on the trophy' already.

"When you run into opponents who make it incredibly tough for you, the onus has to be on you to make it an aggressive game.

"I just have to play the matches on my terms and not be worried by the other guy profiting from any mistakes."

Robertson is 7/2 to win his second world crown, with Judd Trump 11/4 and Ronnie O'Sullivan is available at 4/1.