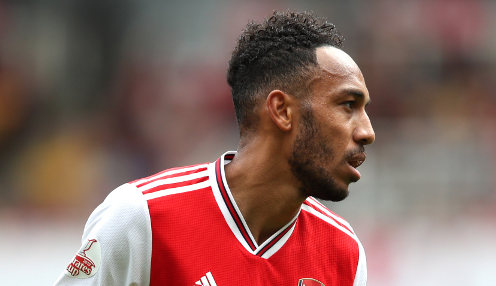 The Gunners skipper missed his side's 4-0 win in the Europa League quarter-final second leg against Slavia Prague on Thursday having contracted malaria while on international duty with Gabon.

Aubameyang spent two days in hospital but Arteta has confirmed that he is now back at home and looking forward to returning to training.

He wants to be back as soon as possible, that's what he said to me.

The striker will be bidding to get back to full fitness in time for the first leg of the Europa League semi-final against Villarreal, managed by former Arsenal boss Unai Emery, on 29th April.

Arteta's side were not hampered by Aubameyang's absence against Slavia, who had held them to a 1-1 draw in the first leg in north London. Goals from Nicolas Pepe, Alexandre Lacazette and Bukayo Saka gave them a 3-0 lead inside 25 minutes and the in-form Lacazette completed the scoring in the 77th minute.

Arsenal are back in Premier League action at home to Fulham on Sunday. They are ninth in the table, ten points off the top four, so their only realistic route back to the Champions League is by winning the Europa League in which Manchester United face Roma in the other semi-final.?

Asked about Aubameyang's condition, Arteta said: "He's at home, he's completely fine at the moment. He had two days in hospital to get the right treatment but he's feeling good now.

"I think he'll need a few days to recover. He wants to be back as soon as possible, that's what he said to me. It shouldn't take too long."