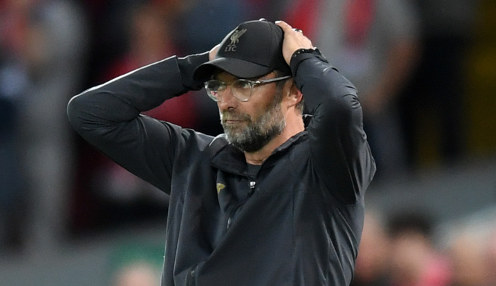 Head coach Jurgen Klopp says Liverpool must keep fighting hard to try and ensure that they earn another crack at the Champions League next season.

The Reds' European campaign ended on Wednesday night as they were held to a goalless draw by Real Madrid at Anfield, losing 3-1 on aggregate in their quarter-final tie against the Spanish champions.

We want to be in the Champions League next year, but we still have to pick up more points than a lot of other teams.

Despite that disappointment, Klopp feels his side are playing well, although he knows there is no margin for error in the battle for a top-four spot in the Premier League.

However, they have got their league campaign back on track, beating Wolves 1-0, Arsenal 3-0 and Aston Villa 2-1 in their last three outings, and they are aiming to extend that winning run away to Leeds United on Monday.

Liverpool are currently sixth in the table, but third-placed Leicester are just four points ahead of them with seven games to go and West Ham and Chelsea are also in the Reds' sights.

Asked about the race for the top four, Klopp said: "We know the situation. I think we are not in a bad moment. We played pretty well even when it was a late winner against Aston Villa. We played really good against Arsenal.

"We really have to keep going, we have to keep fighting, we want to be in the Champions League next year, but we still have to pick up more points than a lot of other teams."

Liverpool are 4/6?to beat?7/2 hosts Leeds on Monday and?8/11 to finish in the top four come the end of the season.